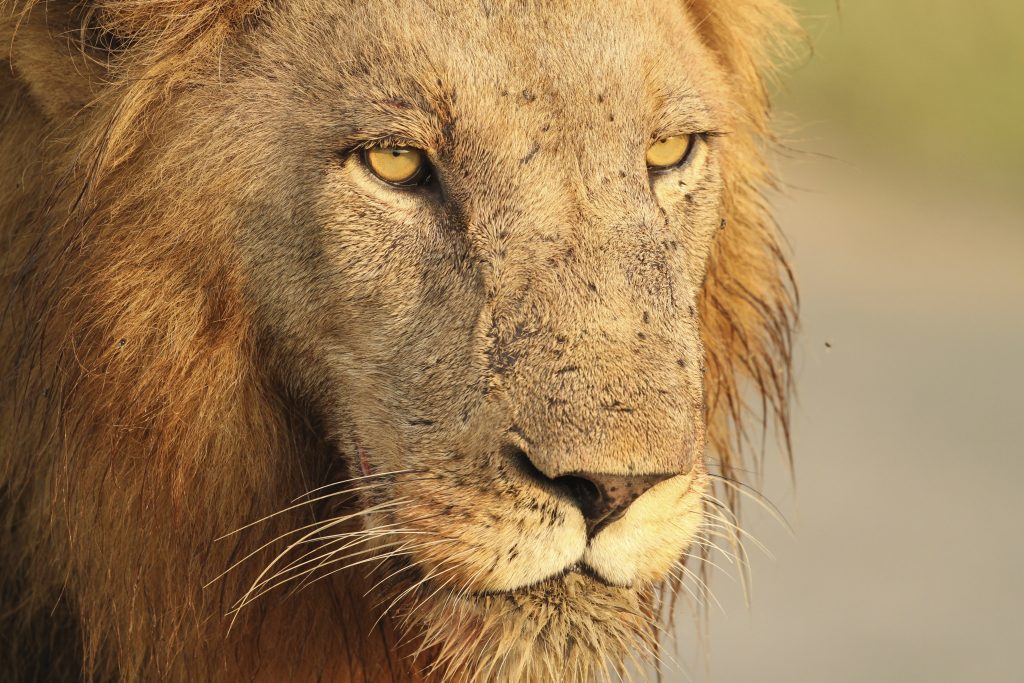 I really love those ferocious lions (Afrikaans name, Leeu), their beauty, their strength and their simple majesty and that oh so regal look that they have about them. Lions are the second largest cat family in the world after the tiger the lion is of the genus Panthera leo. They are fast becoming more scarce due to hunting and habitat removal and are now on the vulnerable list. 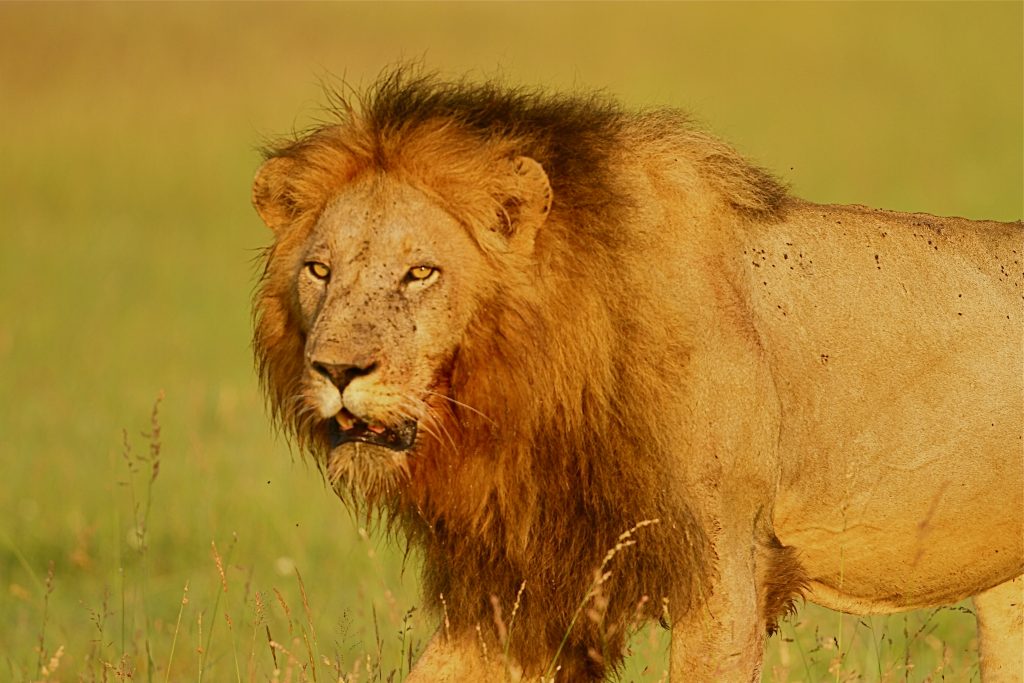 We count ourselves as very fortunate to have seen these beautiful creatures in their natural habitat in the Mala Mala game reserve and were even luckier to come across a buffalo kill in the early morning light at 07:30hrs, most of the kills taking place at night, the kill had happened about an hour earlier and with our ranger Ross Forbes, we were the first to discover it. 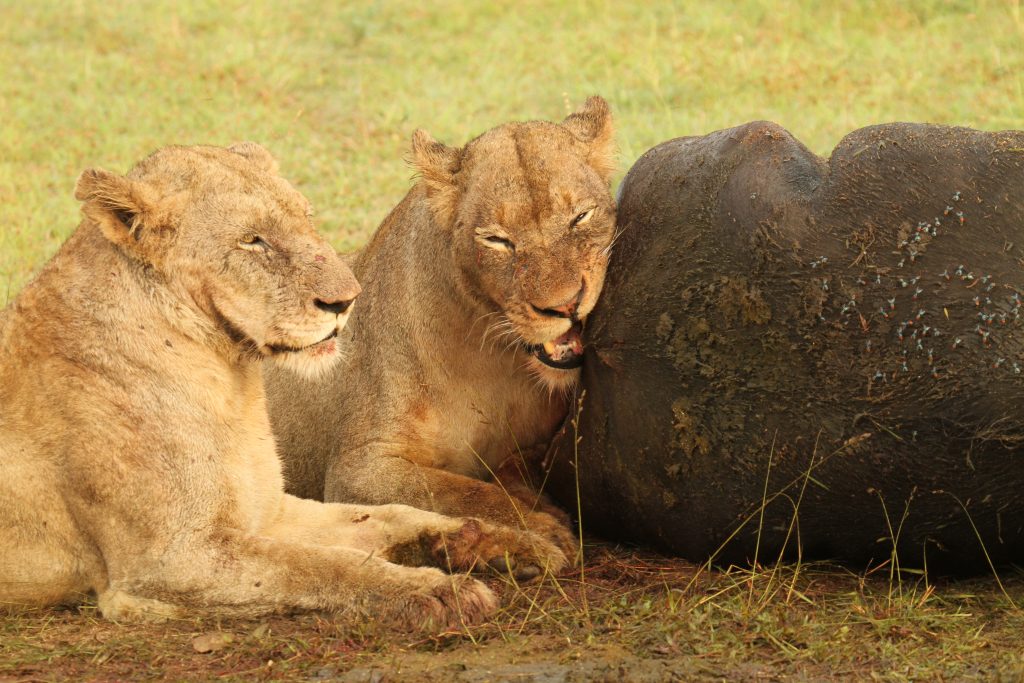 All in all there were two huge males, four females and two cubs. They had taken out the stomach and dumped the contents just a short distance from the buffalo carcass. The males had already finished eating and the females were next, they called out to the cubs who then joined them. Quite something to see this pride all together. 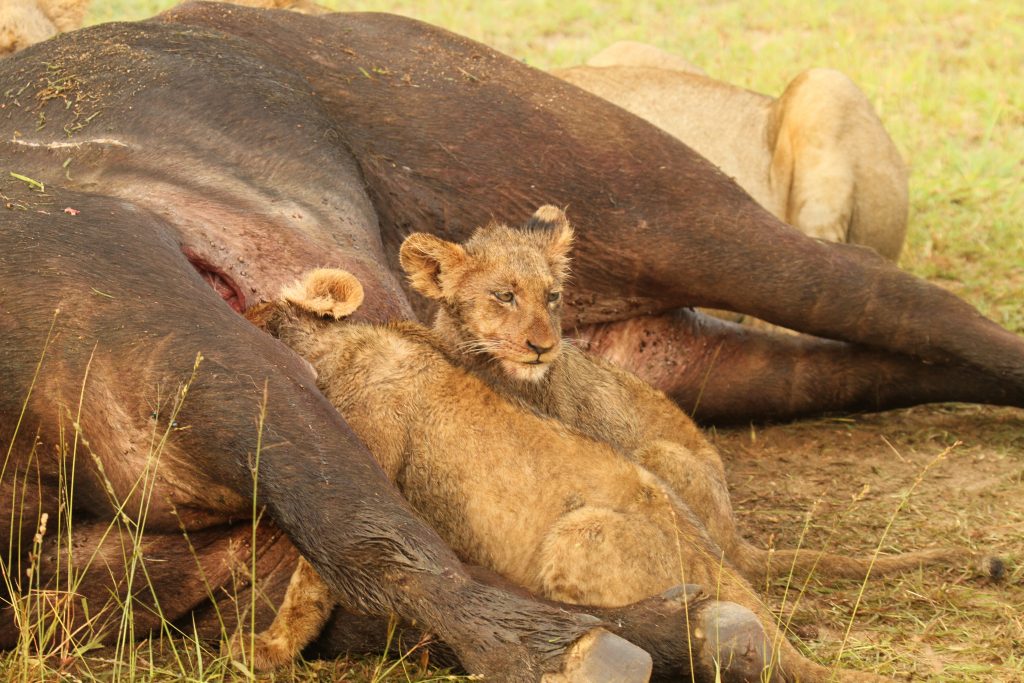 What an eating frenzy, each would eat for some 15 to 20 minutes until totally gorged and then would walk away and roll on their backs to get the food down only to return a few minutes later for a second course. It was such an amazing sight that eventually you just had to put your camera down and drink it all in with your eyes. 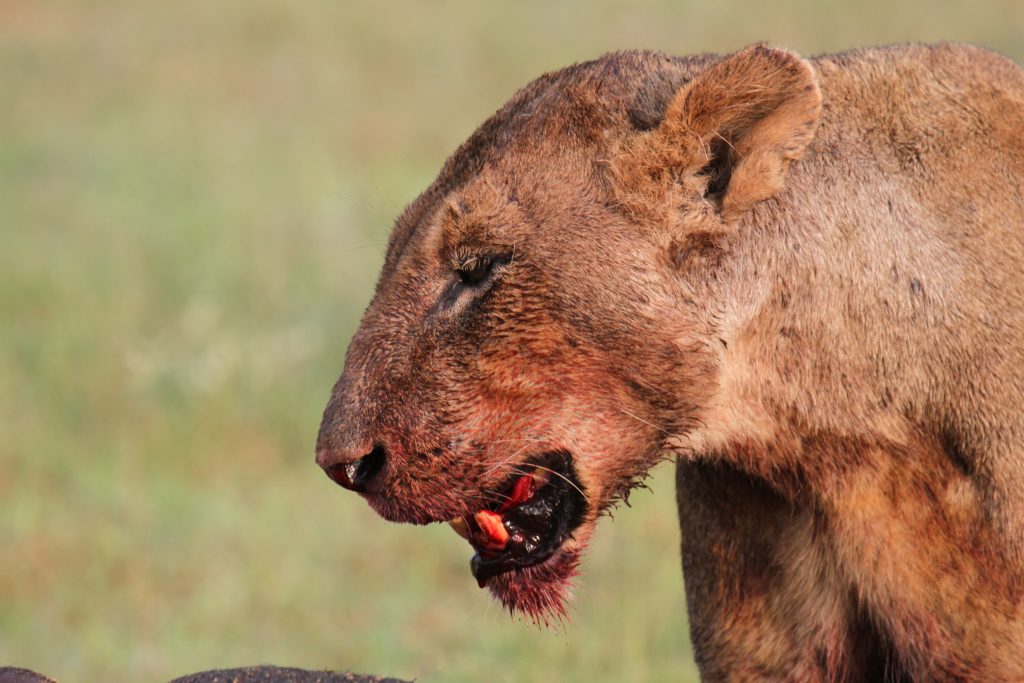 The cubs were so cute, they were quite big but had not yet lost their baby spots, which can still be seen on their back legs. They would gorge themselves, disappearing up to their waists inside the carcass and reappearing covered in blood, then drinking from their mother in the resting bouts and even playing with their mother’s tail. Absolutely delightful to behold. 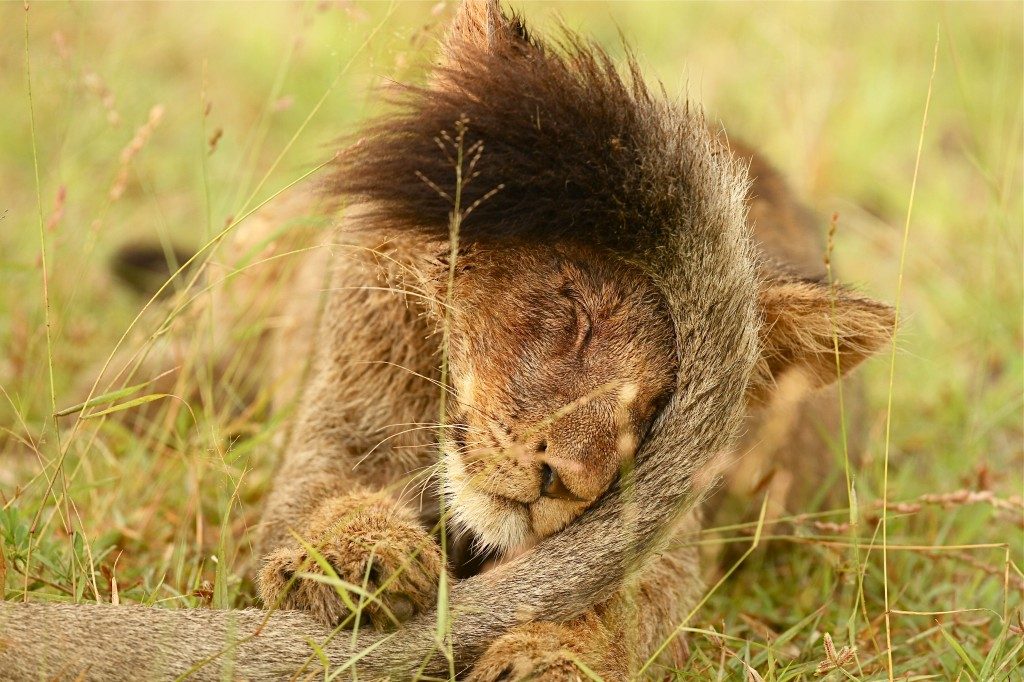 If you look at the size of the buffalo in comparison to the lions it is hard to believe that they would have the brute strength to bring this buffalo down. Obviously numbers count but even so it seems to be a huge concerted effort that is required. 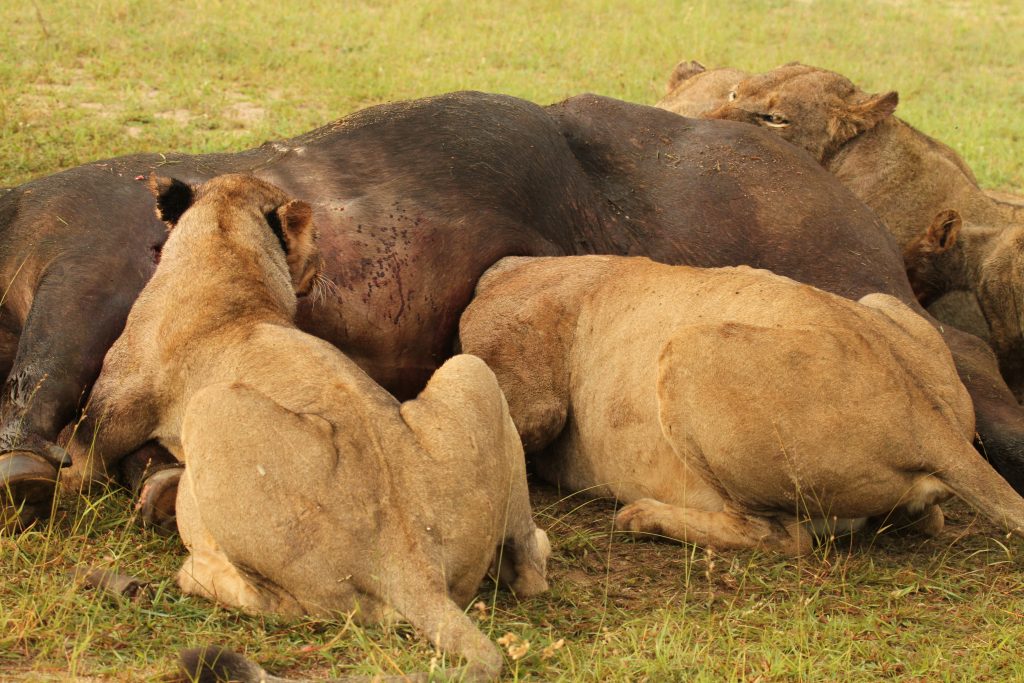 Just a short distance away there were four side striped jackals lying in the grass awaiting their turn but as this kill was out in the open I wonder if they would have been beaten to the spoils by the hyenas or even the vultures? 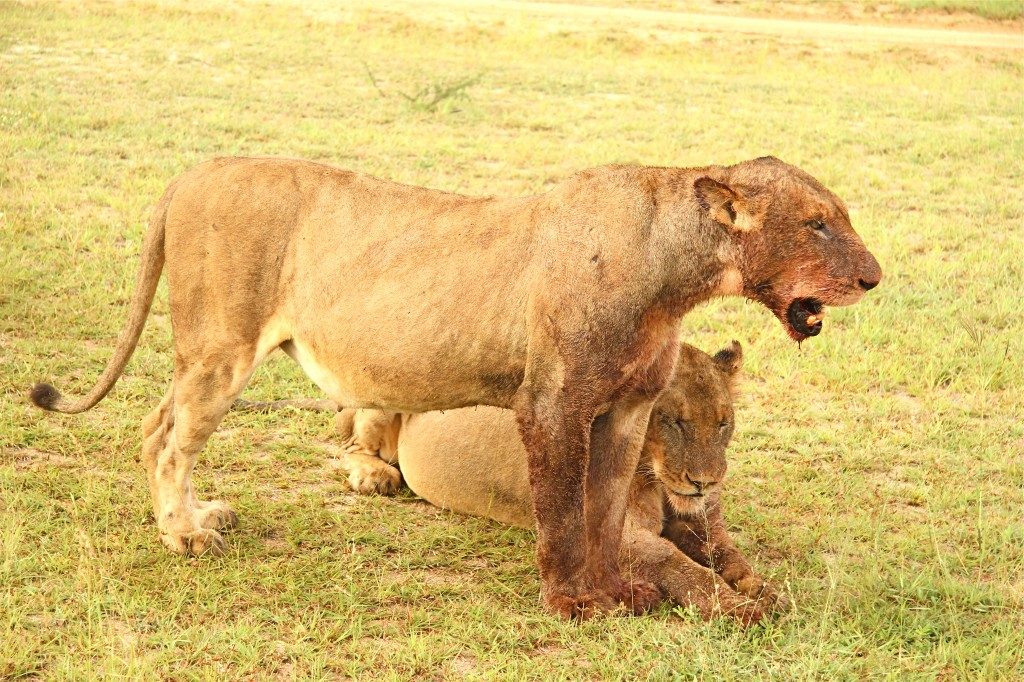 We have so many photos from this kill that it has been very difficult to choose which ones to put up, hope you enjoy our choice. 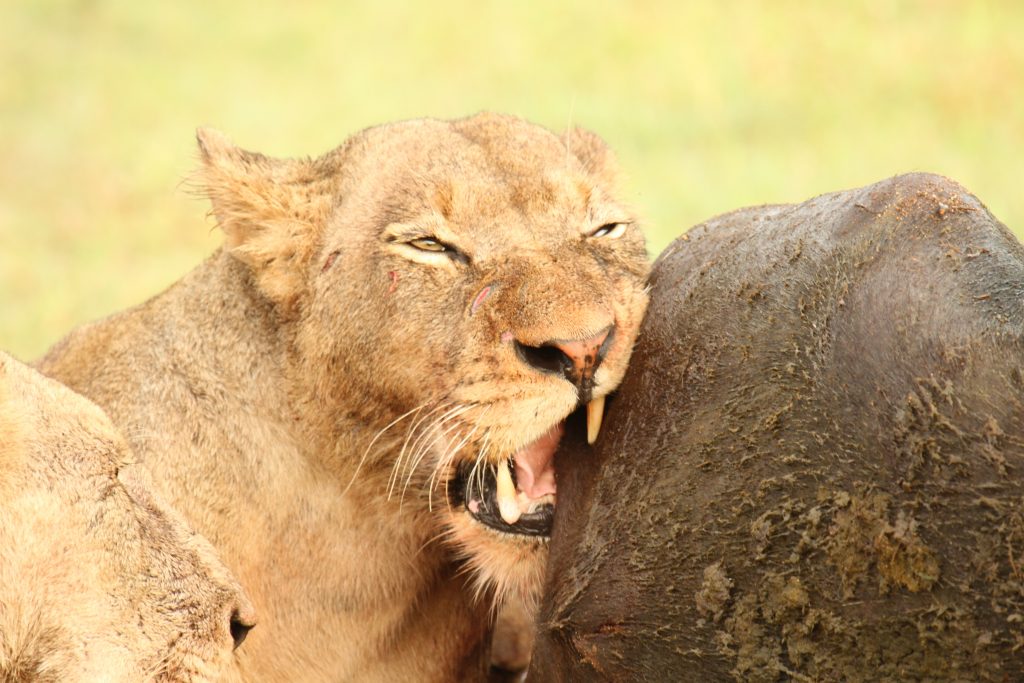 You can see the scratches on this lionesses face from the ferocious infighting as each one tries to get the lion’s share.